This year’s Winter Camp marks the 40th anniversary for this Seminar!
The Norwegian Aikido Federation and Reimeikan Aikido invite you to Tromsø to celebrate with some Arctic Aikido! 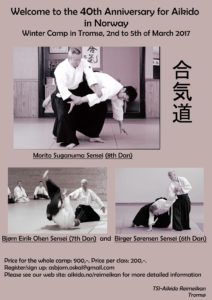 The Norwegian Aikido Federation and Reimeikan Aikido invite you to join our celebration of the origin of Aikido in Norway. The Jubilee Seminar marks that there will be 40 years since Birger Sørensen Sensei opened the first Norwegian Aikido Dojo in Tromsø in 1977. Bjørn Eirik Olsen Sensei was among the first students who entered, and he later became the instructor.

The Winter Seminar in Tromsø has a long tradition. The first seminar taught by a high ranked instructor was with Ichimura Sensei (living in Sweeden at that time) in 1978. Then Kanetsuka Sensei came from 1980, and he taught regularly through the 1980’s. Since then the annual Winter Seminars have been mainly taught by Bjørn Eirik Olsen Sensei.

Suganuma Sensei, who will turn 75 in 2017, will come all the way from Fukuoka to Tromsø to teach the main part of the Jubilee Seminar. In addition to good Aikido and a great party, we hope visitors will be able to enjoy some Arctic aurora borealis.