In connection to this, there was a small Shinto ceremony where Bjørn Eirik Olsen could offer his gratitude to Morihei Ueshiba, the founder of Aikido. The ceremony took place in Doshu’s home in Tokyo, in a room dedicated to the spirit of his grandfather. 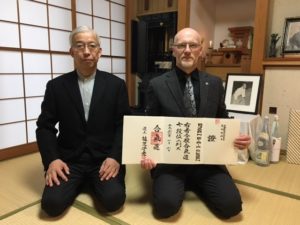 The grade was recommended by Morito Suganuma Sensei, Bjørn Eirik’s closest teacher since he lived in Fukuoka in the early 1980’s. In the picture below, he formally receives the certificate from Suganuma Sensei in his main Dojo, Shoheijuku Hombu Dojo. 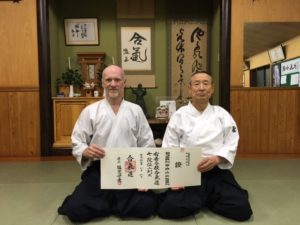 Bjorn Eirik started with Aikido in Tromso, 1977. Soon he went to London to train Aikido full time, followed up many years of intensive practice in Japan. His earlier teachers were Minoru Kanetsuka, Seiseki Abe and Morihiro Saito, as well as several of the elder Hombu Dojo instructors. The most influential teachers later became Morito Suganuma and Minoru Inaba.

Since 1998, Bjorn Eirik has been the Chief instructor of the Norwegian Aikido Federation. He is also teaching abroad, and through the Aikido Guide-application, his teaching is reaching out to Aikido students in 70 countries.